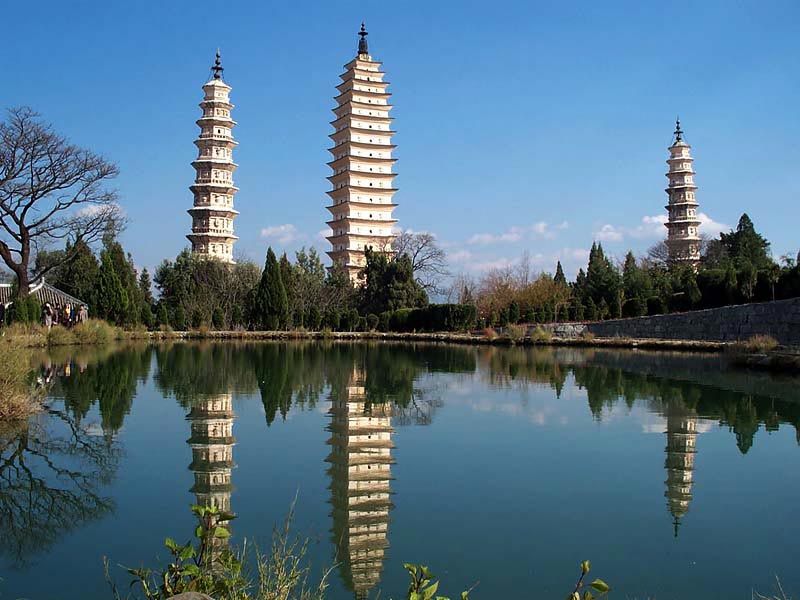 A 2.5 hour trip from The Bivou takes you to the ancient town of Dali, the world of the dominant Bai ethnic group, a minority that has called the area home since antiquity. On the first day, you will visit the Three Pagodas, considered a landmark of Dali, the beautiful Erhai Lake and Dali Old City. Stroll through Dali Ancient City with its cobbled streets and ancient style houses with black tiled roofs. Option: (1) Canoe in Erhai with local fishermen using cormorants; (2) Bike along the shores of Erhai.

On Day 2, begin the day with a 1.5 hour trek through Cangshan Mountain, taking in the view of the whole Dali basin and Erhai Lake, before visiting Xizhou Village, an ethnic village located about 18 km north of Dali. In Xizhou Village, you will visit the traditional houses of Bai people, and enjoy the famous local bread, the Xizhou Baba. You will also be greeted at a local family house with a three-course tea ceremony and a traditional song & dance performance.

The Three Pagodas (崇圣寺三塔) is located to the northwest of the old town. Built more than 1000 years ago in the Nanzhao Dynasty (738-902) and Dali Kingdom Period (937-1254). The Chongsheng Monastery that surrounds the pagodas was destroyed during the Qing Dynasty (1616-1911) and only the towers remain as testimony to Buddhism’s heyday in Dali. Buddhism used to be so prevalent that nine of the Dali Kingdom’s kings abdicated to become abbots at Chongsheng Monastery.

The Erhai Lake to the east of the old town literally translates as “Ear Sea” because its shape resembles an ear or a waning crescent moon. It nourished the earliest Bai tribes before any kingdom took hold of Yunnan Province. Over 42-kilometers-long, it is the second largest fresh water lake in Yunnan Province.

Cangshan Mountain, located on the west side of Dali Old Town is composed of a cluster of 19 soaring peaks forming a natural screen to the west bank of Erhai Lake. Between each of the 19 peaks a stream flows down and pours into Erhai Lake. This natural wonder is known as the Nineteen Peaks and Eighteen Streams of Mt. Cangshan. Mt. Cangshan is home to more than 3,000 plant species as well as various wild animals.